Why Powered Paragliding? and are Motors Reliable? 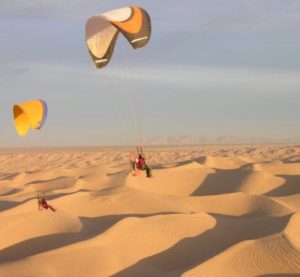 The draw of man’s simplest way aloft and answering the common question “Are paramotors Reliable?”

Paramotors aren’t fast, they take a lot of effort to launch, they require an associate degree in two stroke mechanics and don’t allow you to carry much. So what’s the big deal?

It’s nothing short of the most amazing way to fly ever devised.

A surprising number of airline pilots, with access to about any type of flying machine, pick the lowly PPG as their most fun type of flying. Don’t get me wrong, the other stuff is great, too. Even hot air ballooning is a blast, although it’s pretty limiting. There’s just no comparison to running aloft from a field that was, immediately before, just a field. Now it’s a launch site. How cool.

The year 2008 is my ninth for flying paramotors. And I still learn. That’s another thing–the seeming endless amount of nuance there is to be learned, to be mastered. And you don’t even have to have a motor for a lot of it, just a wing and a harness.

The Joy of Anywhere

We can launch these things from a space whose smallness is mostly up to the pilot. You need 40 feet wide or so to bring up the wing and about 400 foot of climbout space but that’s a lot of places.

Humans are always building. While we may sometimes lament the inexorable paving of paradise, it does have one positive affect: before they build it, they clear it.

The fact that you can carry a paramotor, full assembled, in a minivan offers incredible versatility. Even better is how they can be shipped around with relative ease. Try FedEx’ing a weight-shift ultralight. Not likely.

Yes, there is a downside—motor problems.

I’ll readily admit to not liking this necessary evil but also admit to finding some strange satisfaction in a well repaired part, or a nice-looking, safetied exhaust system. But that pales when compared to the trauma of pulling the cord only to have it come out in your hand. You then watch as your buddies fly off into the year’s most beautiful air. Uggh.

There is truth in how preventative maintenance can prevent lots of teeth gnashing, but I’ve been dumped by nearly brand new machines on several occasions. That includes demos, no less, where the doting seller is wanting his ware to make a good impression. You’d think that such a machine would be in top condition.

And please don’t tell me that “this motor is bulletproof.” That may be true if you’re being shot at but certainly isn’t true when referring to reliability.

I get this question a lot. “Jeff, I’m tired of working on my ____ (fill in the the brand of your choice), what can I buy that’s reliable?”

My response is “a car.” At least until electrics become the thing.

Lets face it, we task these little engines with pushing really hard at ridiculously light weights. Almost all paramotor engines are based on some Italian scooter that rarely demands more than about 7 horsepower. Then we come along, strip any possible extra weight, mount them on really lightweight, vibrating frames, then wind them up to 15 horsepower. Can we really be surprised when something goes pop? Most experienced pilots acknowledge that if you get 30 trouble-free hours from a brand new machine, you’re doing good. Not that the troubles will be big, they probably won’t be, but they’ll stop you from flying no less. That’s why a good postflight is so important–to catch these problems before the blow up into flight-ending episodes.

I’ve bought probably 5 new or nearly new paramotors and all have had some problem within the first 30 hours. Nearly every pilot I know has had a similar experience. Brand is irrelevant, too. Newly introduced motors universally have teething problems. This is one endeavor where I don’t recommend being an early adopter. You may become the reluctant parent of a recalcitrant newborn.

And you can’t take these things to your local dealership to be fixed. In fact even some small engine repair shops are reluctant to work on them once they realize it’s for flying. The American bugaboo: liability. If you’re lucky enough to live where there’s a full-time instructor, he may be able to help. Count your lucky stars if so.

Thankfully, paramotors are usually easy to work on due to their simplicity and openness.

So yes, in all likelihood, you’ll become a mechanic at some degree. But be proactive after each flight, don’t fly with anything cracked, broken or loose, and you’ll at least have far fewer problems. The FootFlyer Motor Troubleshooting section can be a log of help, too.

Overall, the trade off is an easy one. I’ll gladly work on my paramotor when needed, gripe about it appropriately then take to the skies.

The reward sure is worth the price.