Simple, effective alternative ways to shut off a motor

Being able to quickly shut off a motor is critical for several reasons, yet kill switches are easily disabled at their multiple connection points. So it’s good to have a back up. Here are some ideas.

One method is another electrical way to short out the coil, like the regular switch, but pilot Ken Morrison has come up with a novel method to accomplish the same thing.

The idea is incredibly simple, pull the spark plug off.

He rigged it for his non-throttle hand, just below and behind the J bar, but it can be rigged for start up, next to the
hand hold. Take up enough slack as to not get in the prop. Yank the cord and pull the spark plug cap off . Cheap, simple, effective, and only takes about a minute to put together.

Thanks Ken for the suggestion. 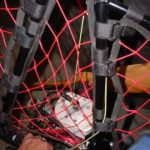 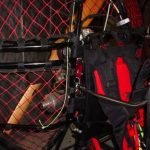 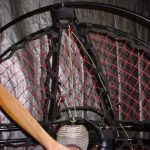 Wayne Mitchler suggested this while researching for the Instructors Manual. He wants to insure the student has a way to shut off the motor in case it gets stuck at full throttle and the motor won’t kill. That has happened, usually when the throttle gets into the prop somehow. Paramotors are designed so that can’t happen but somehow it has on numerous occasions.

On the fuel line he puts in a small loop and attaches it to the frame in a way that can be easily felt by the pilot and kinked. After a half minute or so the motor runs out of gas, leans then dies. It’s not lean for long enough to cause an overheat.

On some motors, namely the later Top-80’s, there is a pilot-reachable choke. Pull that choke and the motor will soon quit.