Bi-annual visit to the $16 Million Flight Simulator. Microsoft, eat your heart out!

It’s never routine. Even the inevitable emergencies aren’t routine. Different instructor, different sim partner, slightly different sim behavior and older brain cells, all add variety. Here is one account of a trip to “the box” that was actually rather enjoyable.

One emergency you can count on is the “V1 cut.”  It’s where the sinister instructor clears you for takeoff and watches blissfully with his hand poised on…the button.

Every takeoff is calculated with a decision speed called V1. It gives the best margin while considering available runway, obstructions and single engine climb capabilities. If there’s a major problem before V1, you reject the takeoff, which we also rehearse. If something happens after V1, you continue with very few exceptions. The non flying (monitoring) pilot calls “V1” as the airspeed approaches it.

It’s actually kind of fun. Much like steering the paraglider with a 50% wing collapse. With the paraglider, if done right, with the just the right amount of input, it looks effortless. Same with the Boeing. And it feels good when you’re all “cleaned up”, climbing at the right speed and spot on heading (or turn when required).

Flying through the V1 cut is a challenging maneuver made harder by the lack of any vertical G force—a pilot’s “seat of the pants.” Simulators can’t reproduce that sensation whatsoever. Flying airplanes transfer even the smallest control column pull or push into changing pressures on the body. Without that pressure, pilots must concentrate almost unnaturally on the instruments. That’s why flying the simulator can humble even the best “sticks.” I love the challenge but am respectful—I’ve watched two very capable pilots pull the airplane into an impossible climb or bank because of this, always when something else bad was happening. In the airplane, they would have nailed it. But the sim did them in.

Every year, airline captains face the simulator twice (co pilots once). First is the checkride then, 6 months later, a training event. They are actually pretty much alike but the checkride has less “wiggle room.” You must show your stuff during an evaluation. Training is generally more flexible and carries less stress. Fortunately I’ve never had to find out what failing either one is like but it does occasionally happen to very capable pilots. They get another chance but, continued struggle will result in job loss and, even worse, loss of their license. It’s extremely rare but makes us take sim sessions very seriously. Plus, pilots naturally want to shine. 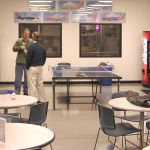 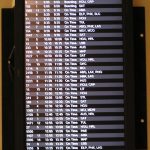 Display of flights in training center 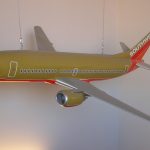 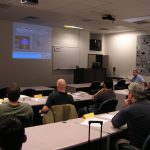 Jim Wendell in the briefing room 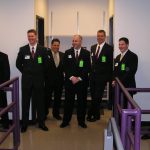 Getting ready for the games to begin 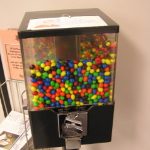 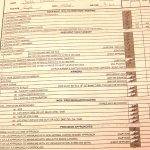 Syllabus of what had to be covered 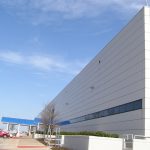 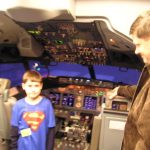 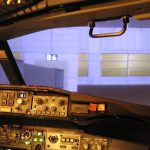 View out simulator window at gate 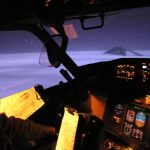 View out simulator window looking out side 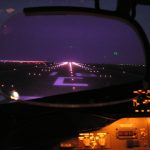 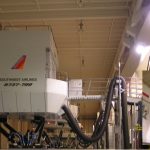 Southwest Simulators all lined up in 2007 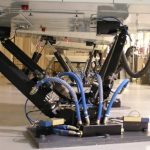 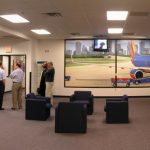 Mural in the main meeting area of the training center

In the bowels of SWA’s training center 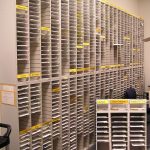 In the days of paper “Jepp” charts 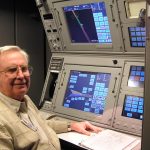 The box itself is an extraordinarily accurate representation of one particular 737. I’ve been told that, if a change is made to that airplane, the change is made to the simulator that represents it. No two are exactly alike. I don’t know if that’s still the case given our growing fleet of sims.

The software to run these behemoths must be fine tuned to accurately replicate flight including noises and sensations. While the sim cannot reproduce vertical G’s, it can shake, rattle and roll—leaving you immersed in the sensations of flight.

The instructor station lets him save points in time, dole out emergencies, erroneous instrument readings and a host of other evils. It records pilot input and flight path for analysis if necessary. After bad things happened in real airplanes, investigators usually try to duplicate the scenario in one of these advanced simulators to improve understanding and test hypothesis.

Being prepared helps in many ways. Mostly it reduces stress. There are memory items to be refreshed and systems/procedures knowledge to bone up on. Changes to standard operating procedures (SOPs) are endemic and this is a good opportunity to review them.

The airlines have done an exceptional job of identifying risk areas and rehearsing to reduce them. It’s always a cost/benefit battle because we could spend twice as much time in the box and not cover every possible event. For example, one unique thing we did on this session had to do with unusual attitude recovery. Besides the usual “decrease angle of attack before righting the roll” (rolling the Boeing is, by the way, almost trivial) we did another exercise. He put in a rudder hardover, meaning the rudder moved to it’s maximum hydraulic authority without pilot input. Let me tell you, that does a lot more than yaw the nose! The airplane first swings then rolls abruptly. You can counter it with the control wheel at high speed but it takes quite a bit. Using a bit of spoiler reduces the necessary roll input. Use some opposite throttle and it requires even less. Just for grins, I slowed all the way down to a 150 knot, 700 fpm stabilized descent at full flaps just to see how that felt. Very enlightening but I sure hope it never happens. The touchdown would be sporty at best. To my knowledge, it has NEVER happened in a 737 so this was mostly academic.

The senior guy usually goes first and, in our case we had two captains so we had to change seats. After spending a lot of time in the left seat, making captain calls and moves, it’s surprising how challenging it is to swap seats. We muddle through it well enough.

Sim sessions are in three parts: briefing, pilot 1 session then pilot 2 session, with each segment lasting 2 hours. So the total sim time is 4 hours.

It’s very much a two man cockpit. If the flying pilot is not doing something he should, the monitoring pilot is expected, either verbally or by hand motion, to let him know. Putting a hand to the gear lever, flap lever or making the requisite call-outs is as important in the simulator as it is on line. And even if your “ride” is over, don’t just sit there. One time, after my checkride was “done”, the FO was doing a takeoff when something happened. I immediately rejected. Then I felt bad because I thought it was a mistake since I was done with my portion. Not so, he did it intentionally just for that reason. Fortunately I did the right thing by rejecting. Such extras are rare because of how packed these sessions have become. We were obviously ahead of the clock.

I’ve seen our airline triple in size since I arrived. The facility has necessarily kept pace and even improved dramatically, in size, comfort and effectiveness. Southwest works hard to create an inviting atmosphere and it’s helpful. So far, all of my 26 visits to the training center have been enjoyable.

The building itself is impressive beyond first impressions. The simulator bays have a concrete floor to support the pylons that exert enormous force as pilots are tossed about reining in their various emergencies.  Until this visit, I thought that was the bottom of the building. But this time I was scouring for pictures and wandered into the bowels. Deep they go! Turns out there’s an entire extra floor beneath the simulators. There are computer rooms, one behind each simulator, that run the works.

The building has been recently expanded and looks like it can accommodate probably 4 more sims. That makes sense, the airline is growing at about 10% per year which, if it continues, will make it the largest U.S. Airline within about 5 years. It’s already the largest by several measures.

It’s all perspective, I suppose. It’ll definitely be less fun if age or other problems make it a struggle. It’s work, to be sure, and checkrides carry a healthy trepidation that gets you soundly into the books. That’s some of what it’s for.

I’ve been at companies where training was a far more threatening environment and that was not fun. I learn more in this environment and suspect that other do too. On several occasions, primarily during training events, I’ve accepted the offer to do other things that we don’t normally get to practice. I’ve done 3 double engine out landings from altitude and a manual reversion where there was no hydraulics at all. Very enlightening. It would be fun to someday go in without the job pressure but alas, at a huge hourly cost and tight schedule, they don’t allow that. Too bad.

I’ll just have to make do with opportunities as they come up and hopefully will feel comfortable taking advantage of them. I’m glad too have the chance!